How to play Codenames

Read this quick article to learn how you can play Codenames in Kumospace.

Codenames is a popular word-guessing game usually played by 4-8 people. Secret agents are split into two teams, with a Spymaster on each team.

To add Codenames to your Kumospace:

The honor code for Codenames in Kumospace

If you already know how to play Codenames, take note of the following. In Kumospace, when you and your friends click on the Word Guess board game a window will pop up with two viewing options: Player and Spymaster.  Anyone can toggle between these two views. This means that any player can take a peek at the Spymaster view – if you know this game, then you know that's cheating if you're not the Spymaster! Cheating is bad! Don't do it.

If you don't already know how to play Codenames, keep reading for an overview or watch this helpful video.

Spymasters only, click the Spymaster button to reveal the map, where you will see:

The hint can only consist of one word and one number.

The hint word should relate to as many of their own team’s codenames as possible. It can be any word as long as it doesn’t contain, or isn’t part of any of the codenames on the board.

The hint number should indicate how many codenames on the board are related to the hint word. It also tells the secret agents how many guesses they are allowed to make on that turn (hint number + 1).

The secret agents have to guess all of the codenames belonging to their team from hints given by the Spymaster. They have to make at least one guess per turn, after which they can choose to end their turn freely. To give the turn to the other team, click the End turn button.

To make a guess, the agent who’s turn it is simply clicks on the chosen codename on the board. The codenames on the board will turn red, blue or beige as guesses are made.

If the assassin is wrongly chosen, the game ends immediately, and the team who chose it loses.

If an innocent bystander is wrongly chosen, the turn automatically ends, and it’s the other team’s turn to play.

The game ends when all of one team’s agents are identified (they win the game) or when one team identifies the assassin (they lose the game). 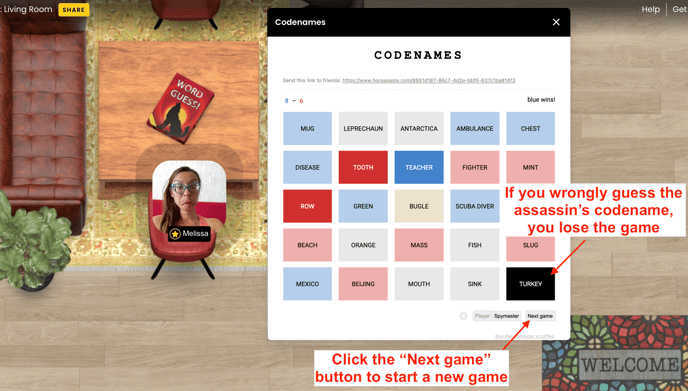 Click the Next game button to start a new game.

Clicking the Settings button will open the settings menu where you can turn on full screen, add patterned borders to help color-blind players distinguish teams, change the color of your game box, or allow Spymasters to make guesses. 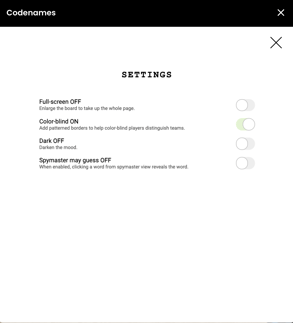